Tours with visiting of city Shahrisabz

Information about city Shahrisabz in Uzbekistan

Shakhrisabz, the birthplace of Tamerlane, 160 km from Samarkand, is located in a small valley, surrounded by the foothills of the Pamir mountains. It was only a small town at the time of Tamerlane, but at his behest, his descendants continued the development of Shakhrisabz long after his death. 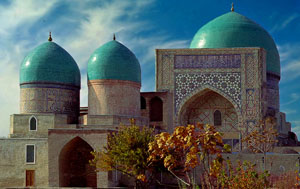 Among the architectural monuments of Tamerlane's time there are the remains of the massive portal of the Ak - Saray Palace, which took 20 years to build and was destroyed by Abdulla Khan of Bukhara in the XVII century.

The Dorussiadat Burial Complex includes a mausoleum for two of Tamerlane's sons, Jahangir and Umar Sheikh, is an outstanding example of Khorazmian architecture, built by Khorazmian slaves in the second half of the XIV century. Also here is a mausoleum built for Tamerlane himself several years before his death, (although he was eventually buried in Gur - Emir Mausoleum in Samarkand). Arranged in the shape of a tent, the crypt of the mausoleum (the only part that have survived) has a single marble grave with its cover left open, waiting for Tamerlane. The walls of the crypt are very simply decorated with design in the shape of a teardrop, and an inscription in Arabic reading: "A wise and powerful man shall seek the advantage in every situation and act on his own, where as a fool waits upon the action of others". 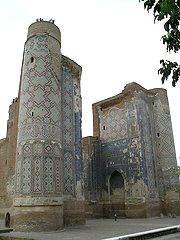 The town was almost destroyed in the 16th century by the emir of Bukhara, Abdullah Khan II, in a quest for the Shaybanid throne. Local stories claim that he became very angry, when he lost his favorite horse from exhaustion on the approach to the city that he ordered to destroy it.

In later times the burial complex was expanded and at the time of Ulugbek an adjoining burial ground emerged - the Dorustilavat, built for relatives that lived in Shakhrisabz. Across a small square from the mausolea is a Memorial Mosque called Kuk Gumbos (The Blue Dome) which in the XIX century was turned into a cathedral mosque.